Faith Resting in the Power of God

My desire is to follow Paul's vision in 1 Corinthians 2 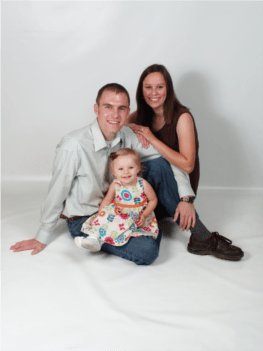 Pastor Chris is the Senior Pastor at Brushy Fork Baptist Church, in Canaan, Indiana. He grew up in Hurricane, West Virginia, and enjoyed playing soccer, hunting, and camping with his family. Chris was saved around the age of six and he grew up at Calvary Baptist Church in Teays Valley, West Virginia. His grandfather, Millard Mitchell, was his pastor while growing up. Chris was a graduate of Calvary Baptist Academy, the christian school supported by Calvary Baptist Church, and went on to attend Liberty University. While on a mission trip to Guatemala his freshman year, Chris was called to full time Christian Ministry. The August before Chris’s junior year at Liberty University, he accepted the call to be the Associate Pastor at Bethlehem Baptist Church in Dillwyn, Virginia.  Chris served at Bethlehem Baptist Church alongside Jeff Mims for three years.

The Summer before Chris’s senior year, he met Kari King who was teaching 1st grade at one of the local elementary schools.  Kari was originally from Fluvanna County, Virginia and had been working near Dillwyn for six months.  Chris and Kari started dating and after seven months Chris asked Kari to marry him.  They were married

***The Rest of the Story will be coming Soon

Unreached People Group of the Day